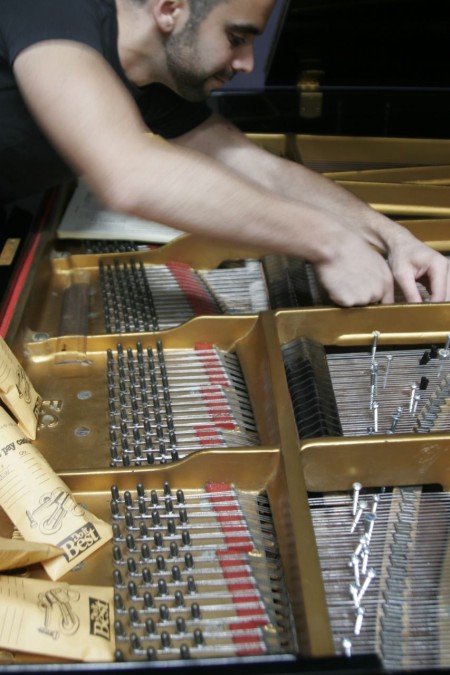 John Cage was working at Cornish College in Seattle in 1940, when he was asked by dancer Syvilla Fort to score a new dance called Bacchanale. Cage was mainly involved with percussion music then, but the stage was too small to accommodate his large array of instruments. Inspired by this limitation, he opted to explore the piano as percussion instrument, altering its sound by placing a variety of objects between and upon the strings and effectively putting “in the hands of a single pianist the equivalent of an entire percussion orchestra.” Cage went on to compose many works for what he called the “prepared piano,” including the wonderful Sonatas & Interludes (1946-48). In honor of the 100-year anniversary of Cage’s birth, acclaimed pianist Adam Tendler performs the complete 70-minute work from memory.

Tendler first made national headlines with America 88×50, a completely independent concert tour offering free piano recitals of modern American music to under-served communities in all fifty states in the US. After the tour, he worked at a veterinary clinic and stowed away in a Malibu apartment with a silent keyboard and Cage’s score, learning it line by line, working backwards from the end until he finally had the piece memorized. “It was crazy; I could play the whole thing from memory on a silent keyboard, but I’d never actually prepared a piano and heard it, so even the process of learning the piece was like an homage to Cage.” Tendler has toured with this work since 2007, and recently released a free download album of a live performance in Hawai’i.

An active pianist, composer, curator, arts advocate, and teacher in New York City, Tendler is the founding director of a daily music series at Soho House New York, and has written an interactive memoir about coming out and coming-of-age during the America 88×50 tour. He performs internationally, directs new music initiatives across the country, and serves as announcer and contemporary music liaison for NPR and Pacifica radio stations nationwide.