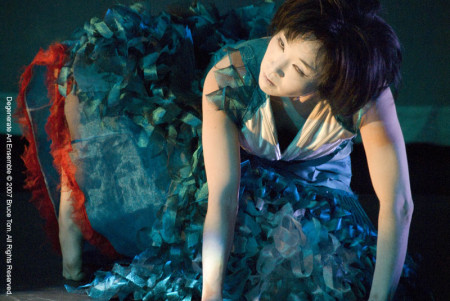 Degenerate Art Ensemble’s new music/movement/dance work, Cuckoo Crow, is inspired by the parasite bird, the Cuckoo, who lays its eggs in the nests of other birds – its huge babies push the host birds’ eggs to their destruction.

Abstracted from an invented myth, the performance begins with one bird miraculously developing in one of the fallen eggs, viewing the world through a tiny crack in the shell. Meanwhile, the baby Cuckoo grows, quickly learning and singing the songs of its hosts. They evolve in a parallel universe. The fallen bird grows, dreams, struggles to survive – but soon dies before emerging into the world.

Cuckoo leads a resurrection by bringing together a team of dancers, costume artists, set designers, instrument makers and composers to create a strange new mythical landscape full of beauty, struggle and humor. This work will be performed by DAE’s collaborating crew of dancer-performer-composers who have had an ongoing working relationship over the past ten years. Artistic Director, Haruko Nishimura, incorporates her unique combination of modern Asian dance, physical theater, intense performance art, and music-driven choreography. A battery of newly created instruments as well as precise compositions will be performed by live musicians and characters on stage.

There will be a post-show discussion with DAE artists.