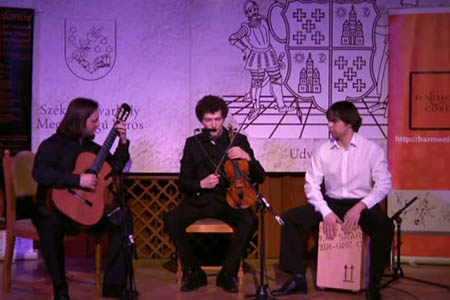 Di Terra is an international trio of musicians comprised of Alberto Braida of Milan (piano), Fabrizio Spera of Rome (drums, amplified objects, electronics), and the New York-based Canadian Lisle Ellis (electro-acoustic bass), implementing cutting edge instrumental technique, compositional structures and, at times, the latest technological methods to realize their musical vision. The group’s classic jazz piano trio format in no way corrals the expansiveness of their music and the unit’s highly personal process accentuates the depth and maturity of each musician.

Unearthed is Di Terra’s program of instrumental music that traverses some of the most vital music terrain of the past century. It is the trio’s “unified field theory,” linking Xenakis to Motown, T-bone Walker to Dead Machines, and reveals stylistic divisions such as classical, pop, rock, blues, etc. to be a faded concept. The new material – mined by way of a collective process that recontextualizes the essential features and elements of their sources, whether it is an altered version of People Get Ready by the Impressions or an improvisation fueled by substance from Ligeti’s Violin Concerto – moves from highly structured to completely improvised, conventional to innovative, secular to profane, and from the ancient to the future.

Lisle Ellis, the trio’s senior member, has played an important role in the development of improvised music in his native Canada and shortly after relocating to the U.S. in the early 1990’s, he rose to prominence on the world stage. His work as a bassist has graced over forty CDs and has propelled ensembles consisting of some of the leading individuals such as Cecil Taylor, Paul Bley, Peter Brotzman, Marilyn Crispell, and Myra Melford.

Alberto Braida obtained a diploma at the Conservatorio di Musica Giuseppe Nicolini di Piacenza in Italy. Since he began, his focus had been on improvisation and its relationship with composition. Braida has collaborated and played with musicians and composers such as Wadada Leo Smith, Peter Kowald, Paul Lovens, Wolfgang Fuchs and Paul Rutherford. He is one of the curators of “Contemporaneamente”, the contemporary and improvised music festival in Lodi, Italy. In 2003, he traveled to New York to perform in the Improvised and Otherwise Festival and, in 2004 released a CD of solo piano music. Braida also serves as a professor of piano, harmony, and improvisation at the Francesco Gaffurio Acaademia Musicale in Lodi.

Since the end of the 1980s, Fabrizio Spera has been active as a musician and organizer in the field of experimental music with a special interest in free improvisation. He has played and collaborated with, among others, Otomo Yoshide, John Rose, Tom Cora, Conrad Bauer, Tristan Honsinger, Werner Ludi, John Butcher, Lol Coxhill, Chris Cutler, Mario Schiano, Giancarlo Sciaffini, Sebi Tramontana, Martin Tetreault, and Saadet Turkoz. Spera has performed at major festivals in Europe, Japan and Canada.