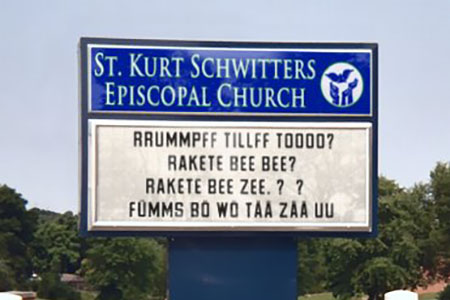 The Dada intermedia artist Kurt Schwitters‘ epic Ur Sonata is arguably the great sound poem to emerge from the various experimental art movements of the early 20th century. Structured in a classic four-movement sonata form (plus introduction, finale, and cadenza), the work explodes language (German) and recasts the fragments as a primal verbal music of disjointed syllables and phonemes.

This performance of the Ur Sonata merges two distinct approaches to the material. Actress and vocalist Kristen Loree gives a tour de force performance of the complete text, set against a backdrop of projections by visual artist Jack Ox. The images are derived from Ox’s translation of the poem into a series of paintings that run continuously for 800 feet. Loree will also perform By Language Embellished: I, a work for solo actor/percussionist by composer Stuart Saunders Smith.