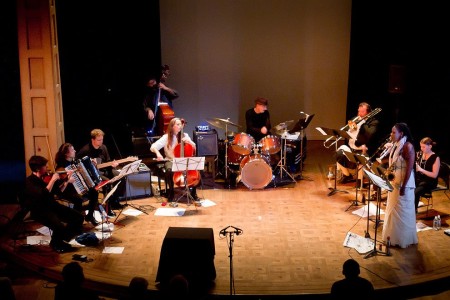 Chicago born and bred, Matana Roberts is an alto saxophonist/ composer/performer working in various mediums of improvised sound and performance, and has been active in New York since 2001. A Van Lier and Brecht Forum fellow, as well as a 2008 and 2009 nominee for an Alpert Award in the Arts, she has appeared as a collaborator on recordings and performances worldwide with her own ensembles and with a variety of collaborative ensembles, including Sticks and Stones, Burnt Sugar, Exploding Star Orchestra, the Oliver Lake Big Band, the Julius Hemphill Sextet, Myra Melford’s Happy Whistlings, Jayne Cortez’s Fire Spitters, and Merce Cunningham Dance. The success of her 2008 debut release as a leader, The Chicago Project (Central Control International), led critics to call Roberts “one to watch” (Kevin Legencre, Jazzwise) and “an eloquent, dramatic, tone-warping free jazz artist right out of Ayler’s anti-bop tradition.” (John Fordham, London Guardian)

Since 2005, Matana Roberts has been evolving this epic sound narrative about the intricacies, contradictions and questions that surround the human bloodline experience. Divided into twelve “chapters”, COIN COIN explores how, when broken down into the most minute details, new meanings arise beyond the surface levels of one-dimensional human acceptance, generally attached to shades of difference, and fear of the unknown. Transcending sometimes the unbearable in order to create new possibilities of understanding the human condition. Using research she has done on her own bloodline history and various ensembles she leads as the “guinea pig” in this sound endeavor, she has been able to cull a myriad of rich and awe-inspiring stories that speak many interesting truths about the flexibility and wonder of individual understanding. Traversing the American South of days past, Matana is weaving together stories and lore that speak to a very distinct, historically experimental, yet common American experience. For her, this is a very personal search in sound practice that opens a dialogue for possibilities going beyond the specific; regenerating a focus that she hopes in the end celebrates the inherent potential that resides in the overflowing capability of human love, sadness, kindred-ness, perseverance, and joy. In essence, the project is a musical monument to the human experience.

Matana writes about her work on the narrative in her print ‘zine Fat Ragged, as well as on her blog, and has also been building site-specific sound installations called COIN COIN Happenings. Excerpts are available for listening and download at WFMU’s Free Music Archive.