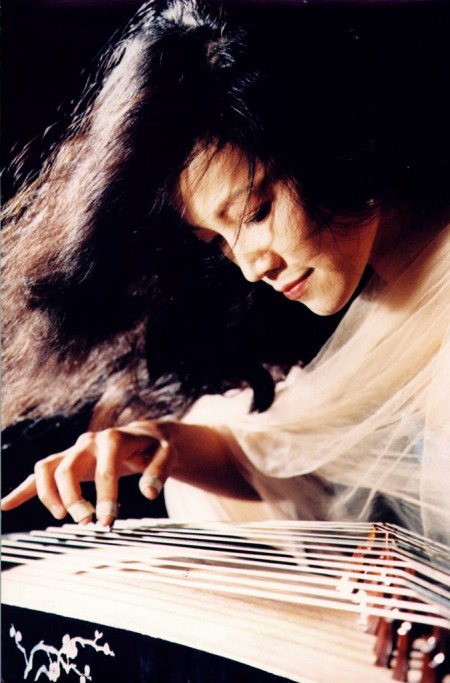 Mei Han and Randy Raine-Reusch have created a radical new repertoire, combining five thousand years of Chinese musical traditions with those of experimental music, world music, and jazz. Performing powerfully evocative landmark compositions for the Chinese zheng, a long 21-string zither (ancestor of the Japanese koto), the duo’s performances also feature a host of other instruments from Asia and elsewhere, extending their use beyond classical and folk forms to explore contemporary innovations. These include the Japanese ichigenkin (1 string zither), the Japanese sho (bamboo mouth organ) and its Thai relative the khaen, the Chinese bawu (free reed pipe), the hauntingly beautiful hulusi (free reed pipe), and the radiant dizi (transverse flute). With concerts ranging from new versions of traditional folk songs to modern sonic soundscapes, Han’s sensual melodic style compliments and contrasts with the vigorous improvisations of Raine-Reusch. Their dynamic performances continuously invigorate, fascinate and amaze.

Mei Han is a rare blend of virtuoso performer and scholar, whose performances have been heard on five continents and broadcast nationally in China and Canada, and are included on many recordings sold throughout the world. Presenting music deeply rooted in over two thousand years of Chinese culture, Han is transforming this stately instrument into a powerful tool for the contemporary international concert stage, propelling the zheng into radical new dimensions of musical expression. A dynamic performer and innovator, Han has been exploring new directions for zheng solo and with other instruments in a contemporary experimental aesthetic. She has appeared with leading artists in a multitude of musical genres from symphonic, chamber, free improvisation, and electronic music to traditional and World music. Han studied with China’s top zheng masters Zhang Yan and Gao Zicheng, and performed as a featured soloist for over ten years with the prestigious Beijing Zhan You Ensemble in China. She went on to become a rare blend of performer and scholar with two Master’s degrees in ethnomusicology, from the venerable Musical Research Institute of the Chinese Arts Academy in Beijing (1995), and from the University of British Columbia (2000). Han wrote the zheng entry for the New Grove Dictionary of Music and Musicians, and has published articles in numerous music journals in both English and Chinese. She has lectured on Chinese music in many universities and music institutes around the world.

Randy Raine-Reusch is a composer, improviser, and multi-instrumentalist specializing in New Music for World Instruments. He has spent over thirty years exploring the relationship of music to psychology, philosophy, and spiritual or religious practices. He studied at the Creative Music Studio in the 70’s with artists such as Fred Rzewski, Jack DeJohnette, and Karl Berger before going overseas to study with master musicians in Australia, Malaysia, China, Indonesia, Thailand, Burma, and the Philippines, as well as with “National Treasures” in Korea and Japan. As a result his music contains clear influences from a variety of indigenous cultures and is heavily influenced by Taoism and Zen, as well as the Western experimental tradition. In his performances Raine-Reusch strives for a balance of virtuosity, innovation, and a contemplative depth of spirit, while respecting and retaining the essence of his instruments. As a composer, he has premiered works ranging from large-scale site-specific extravaganzas, electro-acoustic and interactive computer works, to intimate chamber pieces for film, dance, and theatre. Has has performed and/or recorded with the Tianjin Symphony Orchestra, Japanese ichigenkin master Issui Minegishi, composer/improvisers Pauline Oliveros, Stuart Dempster, Jon Gibson, Barry Guy, Robert Dick, Frank Gratkowski, Mats Gustafsson, Sainkho Namtchylak, and Jin Hi Kim, as well as pop artists such as Aerosmith, Yes, and The Cranberries. As a solo artist, with his world beat ensemble ASZA, or with Mei Han, Raine-Reusch has performed at two WOMAD festivals, three World Expos, and on tours to Australia, Germany, Spain, Czech Republic, South Africa, China, India, Korea, Japan, Singapore, Vietnam, Malaysia and the Philippines. He is a contributing editor for Musicworks magazine and has recently written Play the World: 101 World Instrument Primer for Mel Bay Publications. He has been a guest lecturer in the fields of composition, performance, ethnomusicology, and psychology at prominent universities and conferences worldwide.