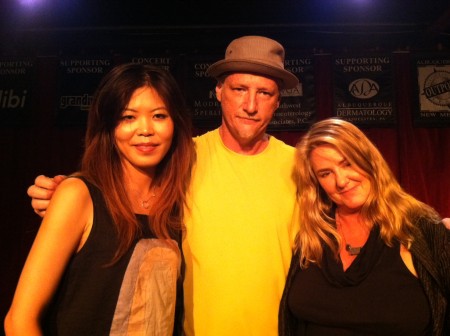 Based in Los Angeles, Emily Hay has been a figure on the left coast music scene for years and is known for her work both as an improviser and new music performer in groups such as U Totem, The Motor Totemist Guild, The Vinny Golia Large Ensemble, Rich West Ensemble, Go: Organic Orchestra, The Jeff Kaiser Okodektet and others. She records and tours around the world and is featured on record labels such as Cuneiform, Public Eyesore, Meta, pfMentum, and a host of others.

In addition to his work as a top studio session musician, Brad Dutz has released numerous solo and collaborative CDs and is a featured sideman on releases by top-name experimental, jazz and pop artists. On the faculty at Cal State Long Beach, Brad also teaches and gives workshops on world percussion techniques and has written several books on drumming.

Originally from Sendai, Japan, Motoko Honda studied piano and improvisation at CalArts with Wadada Leo Smith and is a well-known composer, improvisor and sound artist, performing in numerous ensembles in Los Angeles and the Bay Area. She combines virtuoso piano technique with unusual electronic effects both in and outside of the instrument.

Opening the show is German pianist Magda Mayas. Developing a vocabulary utilizing both the inside as well as the exterior parts of the piano, using preparations and objects, she explores textural, linear and fast moving sound collage. Alongside the piano, Mayas has recently been performing on a Clavinet/Pianet, an electric piano from the 60s with strings and metal chimes, where she engages with noise and more visceral sound material, equally extending the instrumental sound palette using extended techniques and devices. Magda Mayas has performed and toured in Europe, the USA, Australia and Lebanon and collaborated with many leading figures in improvisation and composers such as John Butcher, Peter Evans, Annette Krebs, Phill Niblock, Andrea Neumann, Axel Dörner, Thomas Lehn and Tristan Honsinger.