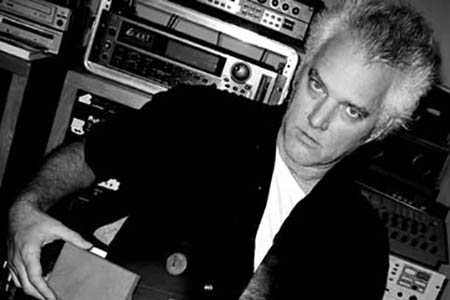 Since the 1980s, the Cold Blue label out of Los Angeles has championed a group of composers that have perhaps come to define a certain West Coast sensibility. Generally favoring beauty and clarity over obligatory complexity or theoretical rigor, the Cold Blue gang sidestep the usual Uptown/Downtown dichotomy and wander their own gorgeous path. Tonight we present two of these intrepid sensualists:

Rick Cox has been referred to by Ry Cooder as “the hidden master of the crepuscular and the diaphanous.” His solo guitar performances present elegantly sparse, dark, sensuous soundscapes in which emotions seem to bubble just below cool surfaces. They also show off his subtle, idiosyncratic electric guitar playing techniques and his ear for unusual and complex harmonies. As a featured performer (woodwinds, guitar, and sampler), he can be heard on film scores such as “The Shawshank Redemption,” “The Horse Whisperer,” “American Beauty,” “Last Man Standing,” and Wim Wenders’ “The End of Violence,” and on recent recordings by jazz/new-music trumpeter Jon Hassell, with whom he has also toured frequently. His own film scores include “Inside Monkey Zetterland” and “Corrina, Corrina.” Cox often performs in the Los Angeles area with new music, avant-rock, and jazz-oriented ensembles. His concert pieces have been commissioned and performed by chamber ensembles and soloists across the U.S. and recorded on the Grenadilla, Advance, Raptoria Caam, and Cold Blue labels. In 2001 Cold Blue released Cox’s solo album, Maria Falling Away, featuring guest performances by Thomas Newman, Jon Hassell, and Chas Smith.

Michael Jon Fink’s music has been described by the Los Angeles Times as “lustrous” and “metaphysically tinged,” and likened to the work of Morton Feldman, Gavin Bryars, and Harold Budd. His compositions for piano and celeste have the lucid, spacious quality of Satie, yet sound thoroughly contemporary. Fink’s music has been presented at the Green Umbrella Series of the Los Angeles Philharmonic New Music Group, New Music L.A., the Monday Evening Concerts, the SCREAM Festival, the L.A. Fringe Festival, New Music America, the Cal Arts Contemporary Music Festival, Festival Commune di Chiesa, and the Martes Musicales. His orchestra works have been commissioned and performed by the Antelope Valley Symphony, the Classical Philharmonic, Symphony of the Canyons, and the Santa Monica Symphony. He has recorded for the Cold Blue, Raptoria Caam, Bare Bones, and CRI labels. His latest Cold Blue CD is I Hear It in the Rain.