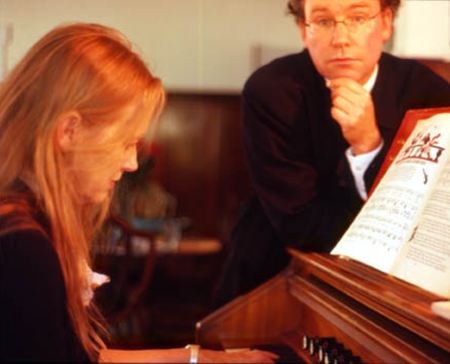 Two singular Seattle-based pianists reprise their 2005 release on the Songlines label. When these two key figures in the expansions and intersections of jazz and other American music forms sat down to plan that album — over the kitchen table, 25 years into their marriage — they opted for renditions of their own tunes, each other’s, and pieces by some essential American tunesmiths. Both Horvitz and Holcomb are true originals, and their album has the startling quality of a complex interweaving of their musical sensibilities, entwined as they have become during ostensibly very different trajectories in music.

Robin says: “We share a wide range of interests and influences. I entered the world of jazz very late in its history with the exuberant improvising of ‘free jazz’ whereas Wayne is much more familiar with earlier jazz forms. I have played more early American folk music and Indonesian music. We seem to both be mesmerized by the harmonic language of hymns, for no particular reason. We are both drawn to the bittersweet in both melody and harmony.”

Horvitz says: “Without question we have very different sounds and techniques, our training and backgrounds are different, although at the time that we first met and also became involved in musical projects together we were both very influenced by Cecil Taylor (pianistically) and all the music coming out of the AACM and the BAG (Black Artists’ Group). Also Keith Jarrett and Chick Corea etc. were very much in the air. As improvisors both of us share a sort of two-handed approach à la Cecil. Also we were being introduced to the music of Messaien and John Cage and many other contemporary composers and hearing the connections between all those musics. Unlike Robin, however, I also have a more single-note ‘linear’ approach that comes from playing jazz at various times in my life.”