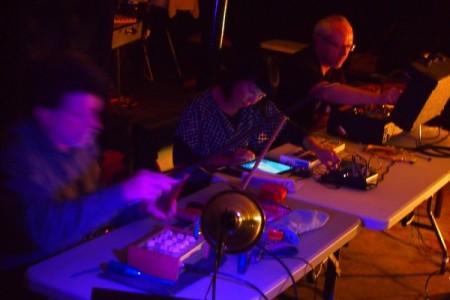 “Hope in gates, hope in spoons, hope in doors, hope in tables, no hope in daintiness and determination.” — Gertrude Stein, from Tender Buttons

Gino Robair has created music for dance, theater, radio, television, silent film, and gamelan orchestra, and his works have been performed throughout North America, Europe, and Japan. He has recorded with Tom Waits, Anthony Braxton, John Butcher, Terry Riley, and Lou Harrison, and he is one of the “25 innovative percussionists” included in the book Percussion Profiles.

An acoustic-electric duo with endless possibilities, Syrinx Effect plays their own blend of folk punk jazz. They easily switch between dreamy ambient loops, catchy pop riffs and found sounds, all the while paying homage to their free improv roots. Naomi Siegel plays trombone with guitar pedals and Kate Olson plays soprano saxophone with laptop and other toys. The duo got its start curating the Racer Sessions in Seattle, and has gone on to perform prolifically around the US, collaborating with many of the mainstays of the improvised music scene such as Wayne Horvitz, Robin Holcomb, Elliott Sharp, Bobby Previte, Stuart Dempster, Allison Miller, Rene Hart. Syrinx Effect makes music that is authentic and expressive, employing everything from simple folk melodies to abstract, ambient noise. Each piece is a meditation, an exploration, and sometimes a romp.