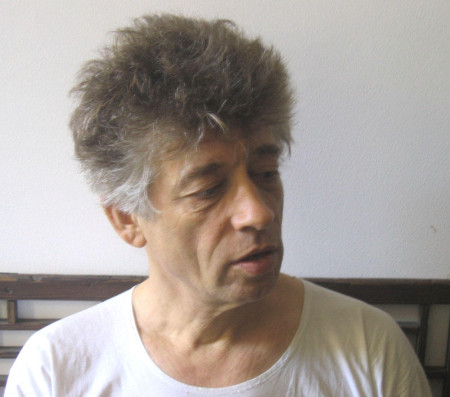 Co-presented with Jack Straw Productions and the Subtext Readings Series at Hugo House.

Chris Mann is an Australian composer (currently based in NYC) working in Compositional Linguistics. Or, as he tells it: “Remember that day in second grade when they told you there was a difference between language and music? Well, I was out that day.” Mann’s work is a dense rush of words – philosophical musings, theoretical babble, Aussie vernacular – delivered at a superhuman velocity that transforms sentences into melodic lines, blurring the distinction between “reading” and “singing.” You can’t understand a word he says, but it sounds great. Much like opera. Only much, much faster.

A founding member of the improvised music/word group Machine for Making Sense, Mann’s texts have been deconstructed, interpreted, and set by admiring artists such as Thomas Buckner, John Cage, David Dunn, Gary Hill, Annea Lockwood, Larry Polansky, Robert Rauschenberg, and Karlheinz Stockhausen. His recordings have been released by Lovely Music, Frog Peak, Nonsequitur, and others.

For his Jack Straw show, Mann will perform using a live computer system that chops his speech into tiny phonemes and scatters them around the room via an 8-speaker array. He’ll be presenting “The Plato Songs,” which he describes thusly: “As ‘law’ was also the word for ‘music,’ Plato’s The Laws was, like the lost sixth analect of Confucius, his text on music. And as The Laws was the out-of-town tryout for The Republic, it seems timely to pry into those early models of conversation theory, the cybernetics of The Dialogues.”

Chris also performed an “unplugged” version of the same work on Wednesday, September 1 at 7:30 PM, as part of the Subtext reading series at Richard Hugo House; he will share that bill with Chinese poet/translator Zhang Er, from Olympia.