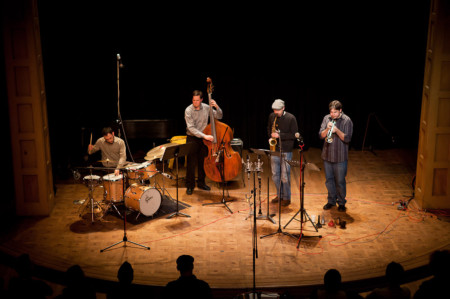 IS THAT JAZZ? is a festival dedicated to daring and exploratory artists who are redrawing the boundaries of jazz, and infusing the genre with new forms, new sounds, and renewed sense of immediacy. Some want to limit jazz to a specific and narrow definition; IS THAT JAZZ? embraces jazz as a living, breathing art-form, one that must change and grow.

The Empty Cage Quartet (Jason Mears, reeds; Kris Tiner, trumpets/flugelhorn; Paul Kikuchi, drums/percussion; Ivan Johnson, bass) has been consistently praised by critics as one of the most interesting and original new jazz groups to emerge from the American West Coast. For over eight years the group has explored new ways to integrate a diverse mix of musical influences, utilizing a unique system that blurs the lines between composition and improvisation.