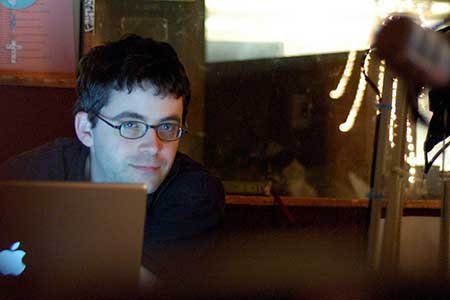 An evening of diverse electro-acoustic music featuring recent work by Jim Haynes (San Francisco), Brendan Murray (Boston), and Steven M. Miller (Singapore). All three of these artists bring a very distinctive approach to the electronic manipulation of acoustic sound sources, whether they be instruments, environmental sounds, or found objects.

Steven M. Miller is a composer currently based in Singapore where he is Associate Professor of Sonic Arts at the Yong Siew Toh Conservatory of Music of the National University of Singapore. His creative activity and background includes: electroacoustic, instrumental, and vocal music; collaborative intermedia projects with photographers, film/video artists, dancers/choreographers, and actors; live performance, gallery installations, compositions for recorded media, and music and sound design for video/film/new media; audio recording and production; traditional musics of Java, Bali, the Balkans, Middle East, and North Africa. He performs regularly in a variety of solo and ensemble contexts throughout the USA and Asia. Performances and radio broadcasts of his music occur in North & South America, Asia, Europe, and Australia. For this evening’s performance, Miller will present structured improvisations for field recordings, signal processing, and live electronics.

Brendan Murray is a self-taught musician living in Somerville, MA. He has actively recorded and performed with electronics since 1999. He regards his music as a balance between spontaneous sound making and compositional rigor, with an emphasis on drones and repetition. He records and processes instruments and tapes until all traces of instrumentality are blurred, leaving only large blocks of pure sound. He has recorded four full-length CDs, four CD-Rs, and two cassettes for various labels in the US and Europe. Murray has also toured extensively throughout the US as a solo performer and as a member of various improvising ensembles. He is actively involved with long distance collaborations with musicians and sound artists such as Seth Nehil, Richard Garet and Chuck Bettis. This is Murray’s debut performance in Seattle, presenting his signature minimalist compositions for reflective vibrations, sympathetic sub-harmonics, and rich tonal frequencies.