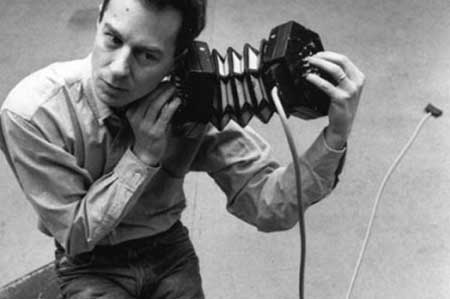 Nicolas Collins (USA) and Peter Cusack (England) have pioneered the use of computers and alternative music controllers in improvised music since the mid-1980s. Using various computers, hot-wired consumer electronics, and actual musical instruments, they have subsequently developed a style of “computer folk-music” that is at once deceptively sophisticated in its technological resources, yet reassuringly familiar in its emphasis on instrumental spontaneity and interaction. With his bouzouki-controlled sampler, Cusack interlaces virtuosic finger picking with a digital library of favorite sonic moments: bird songs, slapping tram wires, short wave noise, Indonesian pop songs. Nic Collins’ “trombone propelled electronics” consists of a home-made digital sound processing system clabbored onto the back of a battered old trombone, through which he can introduce and alter his own library of sounds, as well as instantly record, repeat, and transform the performance of his partner.

Born and raised in New York, Nicolas Collins studied composition with Alvin Lucier at Wesleyan University, worked for many years with David Tudor, and has collaborated with numerous soloists and ensembles around the world. From 1992-95 he was Visiting Artistic Director of Stichting STEIM (Amsterdam), and in 1996-97 a DAAD composer-in-residence in Berlin. Since 1997 he has been editor-in-chief of the Leonardo Music Journal. Recent commissions have included the Netherlands Wind Ensemble, Pro Musica Nova (Bremen), Kammerensemble Neue Musik Berlin and Wittener Tager fuer neue Kammermusik. In 1999 he joined the faculty of the School of the Art Institute of Chicago. His most recent recordings are available on Plate Lunch (http://www.platelunch.de) and Periplum.

Peter Cusack (guitar, bouzouki, live electronics) is a musician/sound artist who has long been fascinated by wildlife and environmental sounds. His work explores that rich area where musical abstraction and identifiable sound can freely interact. Very active in electro-acoustic and improvised musics, he tours and broadcasts regularly with numerous collaborators, including Clive Bell, Nic Collins, Alterations, Viv Corringham, Jon Rose and Max Eastley. A songwriter with the group Kahondo Style, he also helped found the London Musicians Collective and Bead Records. He frequently collaborates with artists in other fields, especially film/video and installation events, including, most recently, “The Week of Small Miracles,” a large scale outdoor project in the Lea Valley area of East London, which he curated. He also teaches Sound Design at The London College of Printing. Recordings are available on the Bead, Plate Lunch, Paradigm and Resonance labels, and his solo CD “Where is the Green Parrot?” is available on ReR.