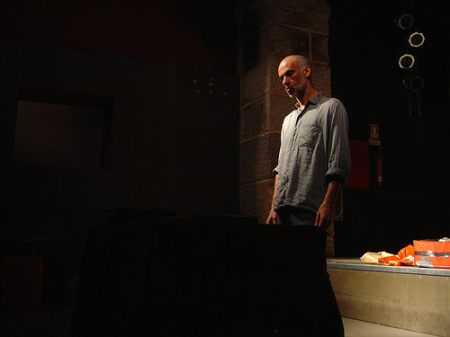 Rinus van Alebeek is a Dutch writer who uses his (environmental) recordings on tape to narrate a story. During the nineties he published two books in his native country under the pseudonym of Philip Markus. The first novel, De Weg naar Oude God, won the prestigious Geert Jan Lubberhuizen Prijs, a yearly award for the best first novel. An accidental encounter with electronic and avant garde music in the year 2000 at the Lem festival in Barcelona, and an introduction to the cassette culture gave way to his further artistic development. In the first decade of this century van Alebeek made a thorough research on how to make or manipulate recordings. Thanks to a great number of concerts, sometimes an average of ten in a month, he developed an approach that has been referred to as “between noise and pure poetry.”

Paris Hurley is an experimental performance artist working to externalize the internal through sound, movement, and the transformation of spaces. A violinist of 23 years, she thrives in a wide-array of roles – composing, performing, recording, producing, dancing, and creating with a long list of Seattle’s most influential artists. Seamlessly morphing between styles and genres, Paris has come to be known for her chameleon-like abilities, exquisitely manipulating her strong classical roots to embody and push the boundaries of many traditions from around the world including Balkan, Javanese, Brazilian, Argentinian, noise, jazz, fiddle, rock, and pop, to name a few.