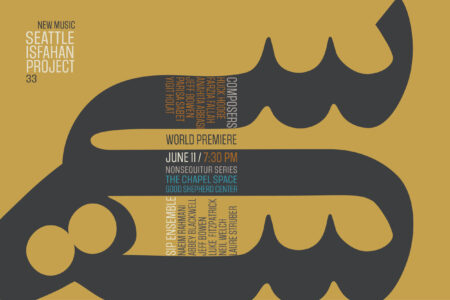 The current Seattle-Isfahan Project, titled 33, has to do with the water crisis that is happening now in Iran, particularly the drought that is affecting the Zayandeh-Roud, the river that gave birth to the city of Isfahan. The project title refers to the 33 arches that make up the most famous bridge across the river.

The compositions, by three Seattle-based composers and three Iranian women composers who live outside of Iran – Anahita Abbasi, Jeff Bowen, Farzia Fallah, Huck Hodge, Yigit Kolat, and Parisa Sabet – incorporate poetry from the Iranian contemporary poet Sohrab Sepheri, whose poetry is closely tied to nature and man’s interaction with it.