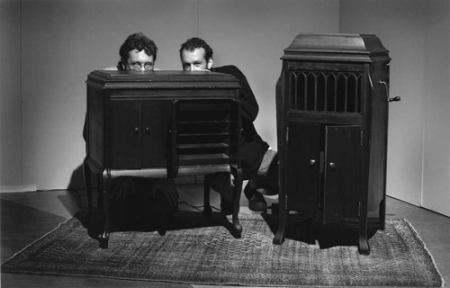 On June 19, Seattle artist/experimental musician Wyndel Hunt was seriously injured in a bicycle accident. He is out of the hospital now, but has no health insurance and will probably not be able to work for quite a while. All money from this concert will go directly to his recovery fund. Please come support this valued member of our community, and enjoy an evening of very interesting guitar-based music.

Climax Golden Twins is the inscrutable and ever-morphing sonic beast animated by Rob Millis and Jeffrey Taylor. Together, individually and with others, they push the definition of a “band” to its limits, making live movie soundtracks, gallery installations, weird ethnographic films, and deeply immersing themselves in the dusty, crackling grooves of old 78s. Willfully defiant of accepted genre boundaries, their extensive catalog of recordings in various formats includes permutations of mutant rock, ungodly noise, and minimal ambient drone. Among many other things.

Vance Galloway is the proverbial Man Behind the Curtain, mainly recognized around Seattle as one of the people who makes the Decibel Festival a reality in his role as Tech Guy par excellence. But Vance is also an inventive musician who has found all manner of ways to pull beautiful sounds out of electric guitars and computers that are connected to each other with wires. We wish he would play out more often so people can hear more of his very interesting music.