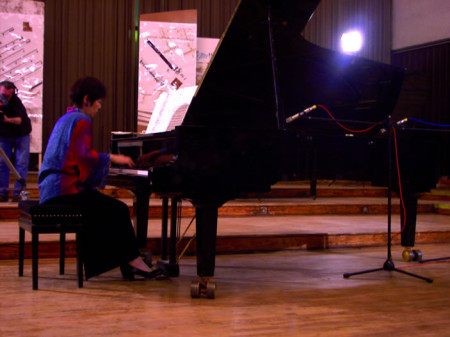 Virtuoso pianist Aki Takahashi is recognized internationally as one of the world’s foremost interpreters of contemporary music. Her enthusiasm for modern music has led her to have close working relationships with many important composers of our time, including John Cage, Morton Feldman, Toru Takemitsu, Richard Teitelbaum, Peter Garland, and others. She is also known for her performances of music by Erik Satie, Olivier Messiaen, Pierre Boulez, Luciano Berio and Iannis Xenakis.

For this concert she presents a program of now-classic 20th century American works:

Charles Ives (1874-1954) was one of the first American composers to develop a musical style independently of such European composers as Stravinsky and Schoenberg. He was born in Connecticut and studied with Horatio Parker at Yale University. To understand the music of Ives is to hear his music as a parade: a celebration of many events going on simultaneously. He experimented with noise, polytonality and with microtonal music. The historian Wilfrid Mellers writes that the technical experiment of Ives’ cacophony is at the same time “an experiment in human understanding.” Ives describes his process this way: “If a Yankee can reflect the fervency with which his gospels were sung — the fervency of Aunt Sarah, who scrubbed her life away for her brother’s ten orphans, the fervency with which this woman, after a fourteen hour work day on the farm, would hitch up and drive five miles through the mud and rain to prayer meeting, her one articulate outlet for the fullness of her unselfish soul — if he can reflect the fervency of such spirit, he may find there a local color which will do all the world good. If his music can but catch the spirit being a part with itself, it will come somewhere near this idea, and it will be American, too. In other words, if local color, national color, any color is a true pigment of the universal color, it is a divine quality. And it is a part of substance in art, not of manner.”

The Banshee by Henry Cowell (1897-1965) is an experiment in musical sonority. The piece is performed entirely on the strings of the piano with the pedal depressed. Born in California, Cowell began his formal training at the Univesity of California Berkeley with Charles Seeger. One of the most inventive composers of his day, Cowell developed a number of formal and technical innovations, such as playing inside the piano, and playing “clusters” of notes with the forearm. One of his formal innovations was a concept, described in a series of articles in 1934, where the performers would choose the order of various segments of music provided by the composer, which would result in his idea of “elastic form.” Cowell was also an important teacher, theorist, publisher and concert organizer, and had an enormous influence on the next generation of American composers, including Cage and Lou Harrison.

Charles Griffes (1884-1920) grew up in Elmira, New York and travelled to Berlin to study composition and piano in 1904-1907. In Berlin he was strongly influenced by German Romanticism and the music of Debussy. An accomplished pianist, his published string quartet (based on American Indian themes), two stage works and several orchestral works are transform-ations of compositions first written on the piano.

Born in Ohio, Ruth Crawford (1901-1953) moved to New York in 1929 to study with Charles Seeger and went to Berlin in 1930 on a Guggenheim Fellowship. Her preoccupation with counter-point in the Preludes shows on the one hand an exceptional purity and precision in the consistency of line against line and phrase over phrase; on the other hand, this focus on contrapuntal melodic movement is rendered at the expense of a lesser focus on color for the sake of color. Unlike the music of her contemporary Stefan Wolpe, who lived for a time in New York and also was preoccuppied with contrapuntal form, the rhythm of Crawford’s music does not drive; instead there is a well-tempered and exquisitely understated flow.

Both the Portraits by Virgil Thomson (1896-1989) and the Preludes of Paul Bowles are drawn from impressions of either people or places. Thomson first started making musical portraits in 1928. The subject sits for his likeness, as he would for a painter, and the music is composed in front of him, usually at one sitting. Thomson writes: “Kirk (Askew) was slight of frame with curvaceous facial forms that gave him a carved-in-mahogany aspect which accorded well with his Victorian house. The title Sea Coast has to do with Constace (Askew) being a strikingly beautiful woman but kind of rock-bound.”

Raised on the West Coast, John Cage (1912-1992) was drawn to New York in 1933 to study composition with Richard Buhling. He also attended the classes of Henry Cowell, and studied with Arnold Schoenberg. He is best known for music that employs chance procedures derived from the Chinese book of oracles, the I Ching. The experimentation with noise in Cage’s earlier music is one that accords more closely to Dada, Surrealism, and the Futurists — artistic movements that originated in Europe — unlike the experiments with noise in either Ives’ or Cowell’s music. In this sense, Cage was one of the first American composers to bridge European and American musical expression without compromising his American heritage. Along with McLuhan and other 20th century thinkers he challenged conventional borders, questioned the internal and the external, where the composition ended and the environment began, and brought a more sculptural approach to music in terms of ideas about movement and time within the performer’s space. In Cage’s words, “The advantage in insisting on a multitude of centers — sounds as their own centers, people as their own centers — lies in not feeling the need to interfere with others.”

Cage’s student, Morton Feldman (1926-1987) was born in New York of Russian immigrant parents and met Cage in 1949. Both Cage and Feldman maintained close association with the emerging abstact expressionist painters in New York in the late 40s and early 50s. In his lectures to students, Feldman gave special attention to what he called “the vertical” in music: as one example, the registration of chords and their placement in time so that it is as though there is a sense of space between the sounds. Particularly in later works there is the intimation of a “canvas” for musical time. In Piano Piece (To Philip Guston) it is as though each of the chords has a particular weight of its own and a brush-like quality that allows each to be heard as an object in itself. Feldman’s preoccupation with sonority, color and other visual aspects in music led to the exploration of graph notation in the early years and later to longer durations for his string quartets and chamber pieces.