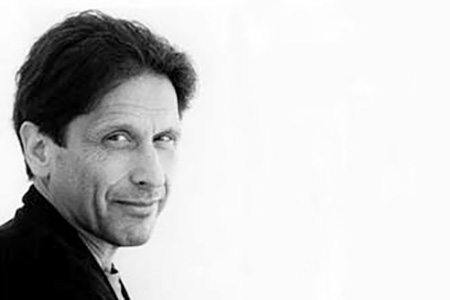 Alvin Curran has been a consistently innovative member of the international New Music scene for over 25 years. Democratic, irreverent and traditionally experimental, Curran travels in a computerized covered wagon between the Golden Gate and the Tiber River, and makes music for every occasion with any sounding phenomena — a volatile mix of lyricism and chaos, structure and indeterminacy, fog horns, fiddles and fiddle heads. With his solo concerts (combining electronics, piano, voice and field recordings), large-scale sound installations, outdoor performances, and radio works simultaneously linking several nations, he brings the whole environment into unpredictable focus through his sonic fireworks, sharp wit and timeless lyricism. Curran’s music-making embraces all the contradictions (composed/improvised, tonal/atonal, maximal/minimal) in a serene, dialectical encounter. His nearly 100 works feature taped/sampled natural sounds, piano, synthesizers, computers, violin, percussion, shofar, ship horns, accordion, and chorus. Whether in the intimate form of his well-known solo performances, or pure chamber music, experimental radio works or large-scale site-specific sound environments and installations, he is dedicated to the restoration of dignity to the profession of making non-commercial music as part of a personal search for future social, political and spiritual forms. A co-founder of the legendary group Musica Elettronica Viva, Curran was the leading sound artist for the Experimental Theater Movement in Rome in the ’70s and has continued as a close collaborator with the Trisha Brown Dance Co., The Living Theater, The Margaret Jenkins Dance Co., Yoshiko Chuma’s School of Hard Knocks, and the Achim Freyer Theater Ensemble (Berlin). He has created works for the Kronos Quartet, Bang on a Can Allstars, ROVA Saxophone Quartet, Relâche, the Abel-Steinberg-Winant Trio, and the Paul Dresher Ensemble. Curran divides his time between Italy and the Bay Area, where he is presently the Darius Milhaud Professor of Composition at Mills College. He has recently released recordings on the Catalyst (BMG), CRI, Tzadik, Mode, Centaur, and New Albion labels.

For this concert he will perform Endangered Species and Weft, Warp, and Purl, works for sampling keyboard and the sounds of the whole world, from Spike Jones to John Cage laughing, Buffalo Mating, and Sonic Youth Howling and Loons Looning on a bed of prominent artists at the Knitting Factory in NYC…

Created especially for this occasion, Weft, Warp, and Purl, is a sonic loom strung with hundreds of samples of musics recorded in the Knitting Factory from its early years to the present. In short, a spontaneous weave of Knitting Factory history based on patterns stored in my sampling registry (Akai 6000), my fingers and 7 octave midi-keyboard.

Endangered Species is my most recent solo performance, which centers around a MIDI grand piano, with which I produce and integrate a vast variety of sampled sounds from every part of the world. Together with my piano playing, which moves seamlessly from fragments of Schumann’s “Carnival,” to freely improvised moments, to Fats Waller’s “Ain’t Misbehavin’,” to unlikely harmonizations of Beethoven’s “Lydian” chorale from the String Quartet Opus 132. This work begins with calls on the ancient shofar (ram’s horn), electronically transformed, and features other theatrically sonic moments. Minimum duration 45 minutes, maximum 80 minutes and can also be performed with a normal grand piano and a MIDI controller keyboard. Created for the Klangumwelten Festival, Akademie der Kunste, May ’95, Berlin; new version given at the Teatro Degli Artisti, Rome, January 1997 and at Roulette, NYC, in March 1998.

“In John Cage’s wake one could see a plastic bottle bobbing and floating. There were strange things inside: A stone from Knossos, a manzanita leaf, a Dr. Pepper bottle cap, a cactus needle and a page from Schoenberg’s Harmonielehrer. We scooped it from the sea and reported our findings to the local authorities — they concluded, knowledgeably, that it was the makings of a new piece, but in any case perfectly safe for children. As I wrote this, a solar-powered Spotted Owl flew over the Crimea River, so far off course that it caused all the music in the world in that moment to go flat by about 50 cents, or a half tempered tone. On the banks of the river sat the Sierra Club — the hottest joint in the area — and that night they were featuring evolutionary music from the Devonian Period: at the piano bar, Jerry Hunt and Maria Callas, in the main ballroom Braxton and LaMonte Young, and mixing in the upstairs discoteque, Maryanne Amacher and Karlheinz. The erudite DJ, Frederic Rzewski was being interviewed by Carl Stone: “…According to Homer the five endangered spices are Mandrake, New York Dill, Icelandic Roquette, Creeping Lemon Thyme and Pigswort…” Everybody was there: Bird, Mack the Knife, Duckworth, Fats, Christian Wolff, Moondog, Saints Ursula and Cecilia, Suzuki Akio, Wadada Leo, Dreyblatt, Big Ludwig, Pavarotten, Elton Johnson, The Mongolians, Dog No More, Oliver Lake,The Albanian Mafia, Hildegard Bingo, Carl Stallings, Rubenstein, The Denpasar English horn quartet, Kosugi, Monk, The Pines of Rome, Billie, Mama La Mozart, Bald Eagle Arnold, Waltzing Matilda, The Rova, The Oakland Exhaust and Muffler Co., Fernet Branca, Spike Jones, The Minnesota Dumbeg Union, The Sorelle Sisters, Xenakis and the Edible Weeds…It was one hundred percent natural, upgraded to MIDI — a mix of raw and cooked Anthropology, long before Kosher became legal. It was like in a Fake Book. Pistoletto walked into a mirror like he was dancing in a sound-pool of wet concrete. In the corner was a big pile of Electric Rags. Satie dressed as a furniture salesman and uttered 5 monosyllabic words on a fog horn. Rzewski was seen again tuning his acetyline torch to Teitelbaum’s Tibetan bowls, for a new version of Attica, where he once studied with Pythagoras. Teitelbaum in turn sampled a Golem’s heart with his defibrillator. Just then A quick brown fox jumped over the lazy dog; a lion Roared in Tuscany, an elephant danced in eleven-four time, Aki Takahashi fitted a catalytic converter to her grand-piano, and Steve Lacy found an abandoned Intonarumori on an empty lot in Riga, fixed it up and began writing a Futurist Opera. Tickets to this performance are available at the excess baggage counter opposite the Pathological Air Terminal. Bring your Luge and organic pulses.